Does the concrete needed to build renewable energy negate the good?

It takes fossil fuels to build renewable energy infrastructure such as solar panels and wind turbines. But those emissions pale in comparison to the CO2 avoided by using renewable energy.

With all these emissions, is clean energy still a good thing for the climate?

The short answer is yes, says Sadoway. That’s because the emissions avoided by using clean energy in place of  fossil fuels is greater than the environmental costs of these construction materials. When you look at it that way, he says, it’s clear that clean energy is worth it.

Consider the example of a dirt road, says Franz-Josef Ulm, MIT Professor of Civil and Environmental Engineering and the faculty director of MIT’s Concrete Sustainability Hub. Paving that road produces short-term carbon emissions that could be avoided by leaving the road unpaved. However, cars and trucks are much less fuel-efficient when they drive on dirt or gravel compared to pavement. Over the long term, the carbon emissions created by that inefficiency dwarfs the short-term CO2 cost of paving the road.

Sadoway says the same principle holds for electric cars: Their construction produces carbon emissions, but over the lifetime of the car, the reduction in tailpipe emissions is certainly worth the upfront investment.

Different clean energy technologies have different materials to consider. “If you want to build a wind turbine,” Sadoway says, “there's going to be a lot of steel.” A turbine also requires magnets that use rare elements such as neodymium, carbon composite blades derived from petroleum, and lots of copper wiring. Solar panels require steel framing and plenty of silicon; producing both materials creates carbon emissions. However, Sadoway points out that once solar panels or turbines are built, they then produce carbon-free energy for decades. “If you contrast the amount of CO2 that would've been created if that same amount of electricity had been generated by burning coal, you're still ahead of the game,” he says.

How far ahead? Sadoway estimates the difference at about an order of magnitude: that is, the emissions saved in the long run are around ten times more than the carbon created in the short term. The Department of Energy’s statistics are even more stark: It reports that wind energy, over the course of a turbine’s lifetime, produces about 11 grams of CO2 per kilowatt-hour of electricity. Solar energy, geothermal energy, and other clean sources all rate at less than 100 grams per kWh. Compare that to 465g for natural gas and 980g for coal.

Nevertheless, Ulm says, it is crucial for construction materials to become more sustainable. In the case of concrete, he says, no other building material can match its durability, usefulness, and ubiquity. “Everybody on planet Earth can make concrete,” says Ulm, “so there's a social meaning, a cultural meaning to this material.” Humanity uses a staggering amount of the stuff, around 30 billion tons per year. That enormous scale, he says, is the source of concrete’s carbon problem. “It is the sheer availability of the material, which is [currently] necessary for our needs for infrastructure,” Ulm says. “There is no material available which can meet our societies’ needs for housing, shelter, mobility, etc. So we need to be aware when we talk about sustainability [and] economic development and social progress.”

Researchers like Ulm are trying to reduce concrete’s carbon footprint at every stage of the material’s life. The greenhouse gas is an inevitable byproduct of making cement, which requires heating limestone to extreme temperatures to separate it into lime and CO2, so Ulm is focused on capturing and sequestering the carbon at this stage. A secondary problem is that heating a kiln to temperatures in excess of 1,000 degrees Celsius typically requires burning fossil fuels. Ulm hopes the industry will be able to alleviate that problem through the use of electrocatalysis, or using a chemical reaction involving electricity to process the limestone, negating the need for a fossil fuel-fired furnace. Sadoway seeks to do the same with steel. His startup company, Boston Metal, is developing a zero-carbon way to manufacture steel through an electrochemical process that creates oxygen as a byproduct. However, both approaches require ample electricity—yet another reason to invest in more turbines and panels.

Thank you to Robert Fizek of Newton, Massachusetts for the question. You can submit your own question to Ask MIT Climate here. 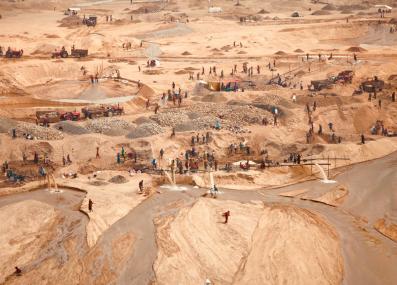 Mining provides us with the building blocks of modern society, but much of the energy used to get minerals out of the ground, and process them, today comes from fossil fuels. 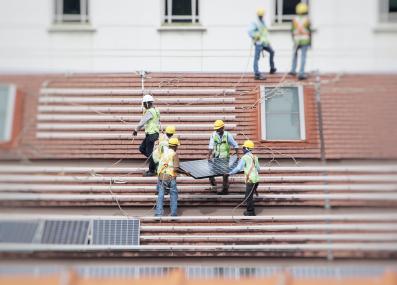 Renewable energy is energy from sources, like wind, solar, and hydropower, that we cannot run out of. 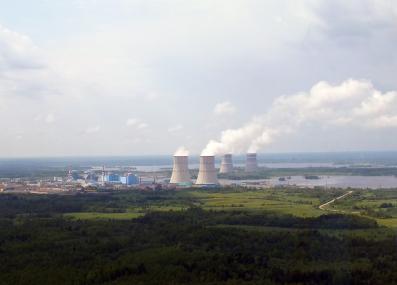 Nuclear energy is low-carbon energy made by breaking the bonds that hold particles together inside an atom.
View All

Is there enough titanium to support the growth of EV production in the US?

Yes. Titanium is an in-demand material for EV production, but due to current design and available technologies, it has little supply risk.
Keep Reading

Can We Cool the Earth by Covering More of It with Snow?

More snow cover could reflect more sunlight back into space. But tinkering with the climate is not something to be taken lightly.
Keep Reading

Where Will Coastal Residents First See the Effects of Sea Level Rise?

Why don’t we use tidal power more?